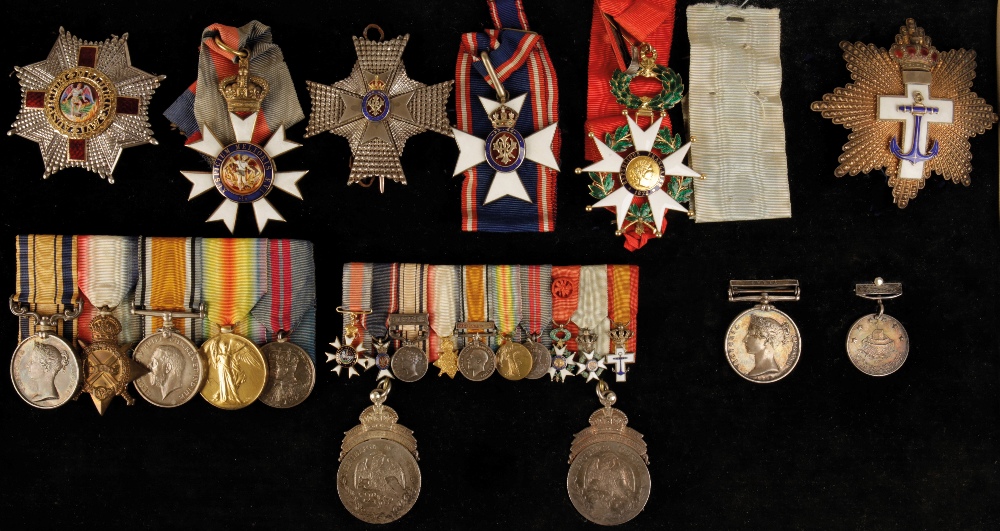 Duke’s Coins, Militaria, Sporting and Tribal Art auction on 14 February 2019 featured a standout group of naval medals awarded to two members of the same West Country family, who saw active service around the world in the nineteenth and early twentieth centuries.

George Edwin Patey and Sir George Edwin Patey, father and son, forged illustrious careers in the Royal Navy.  Both joined the Royal Navy at the early age of 12 years and each had notable accolades awarded to them.
George Edwin Patey, was born in Kingsbridge, Devon, in 1814.  By 1840, he had been promoted to Lieutenant in recognition of his services off the coast of Syria, and was awarded the NGS Medal Bar Syria and the St Jean D’Acre Medal.  He is believed to have been the youngest to be promoted to Captain in the early 1850’s, at the very early age for peacetime of 37.  A number of ensuing commissions took him to the Pacific and the Mediterranean followed by appointments to Coast Guard Service boats in Harwich and then Portland, where he became seriously ill and died at Weymouth in 1862.

Admiral Sir George Edwin Patey KCMG KCVO, born just 3 years before his father’s death, followed in his footsteps. Seeing action ashore during the Anglo-Zulu War in the Naval Brigade, he earned the Zulu Medal as a Sub Lieutenant.  Rising steadily through the ranks to the post of Commander in 1894, he then served in Naval Intelligence as Assistant Director, the Prince of Wales acted as his Aide-de-Camp in the early 1900’s.  His career ascent continued following secondment to the Australian Navy.  At the outbreak of the Great War he was commanding the Australian Naval Squadron, his ship being HMAS Australia, receiving the 1914/15 Trio as a Vice Admiral.  He was promoted to full Admiral in 1918.
Sought after by collectors and museums alike, the group of medals were accompanied by a collection of ephemera and acheived a stellar result of £15,625 (inc. buyers premium)